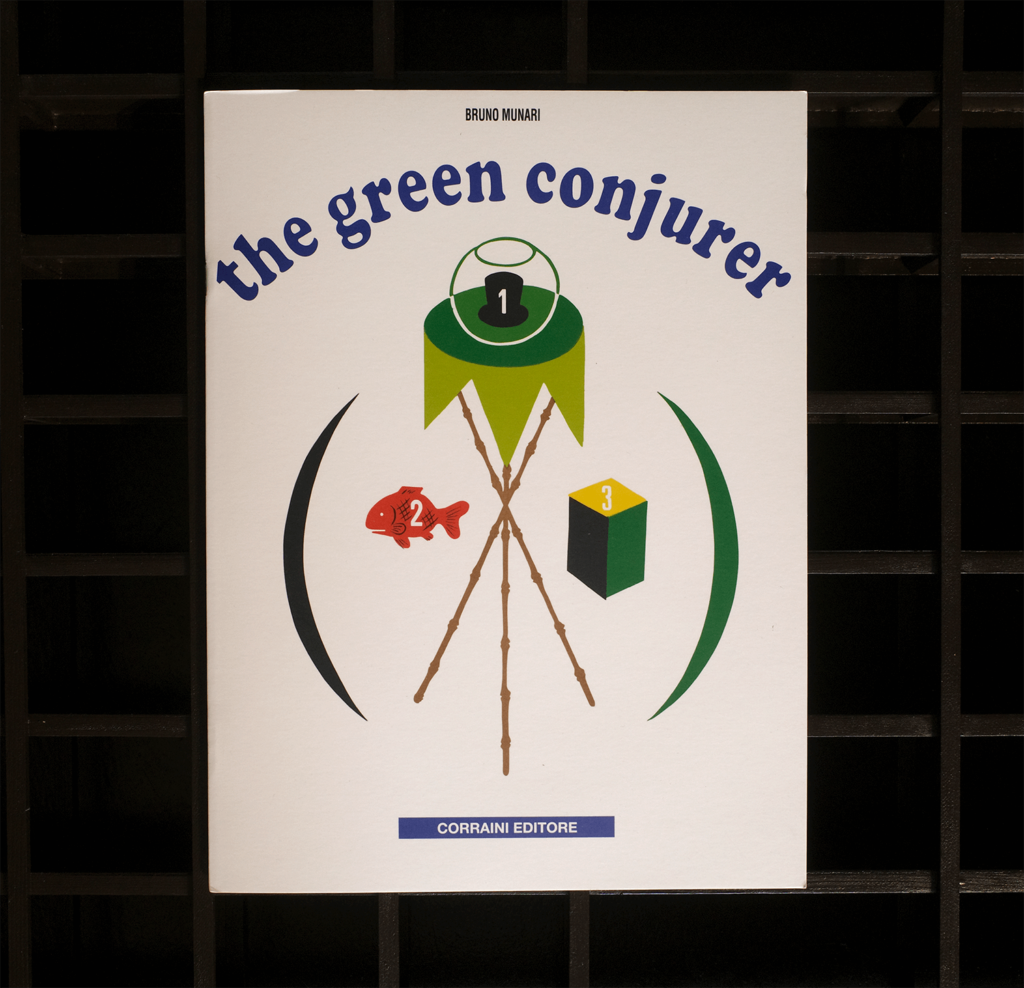 This is the fifth book in the historic series created for children by Munari in 1945. Alfonso, the thoroughly likeable green magician, disappears and reappears in trunks and boxes. At the end he finally manages to play his violin in peace. ↑ ↓ ↓ 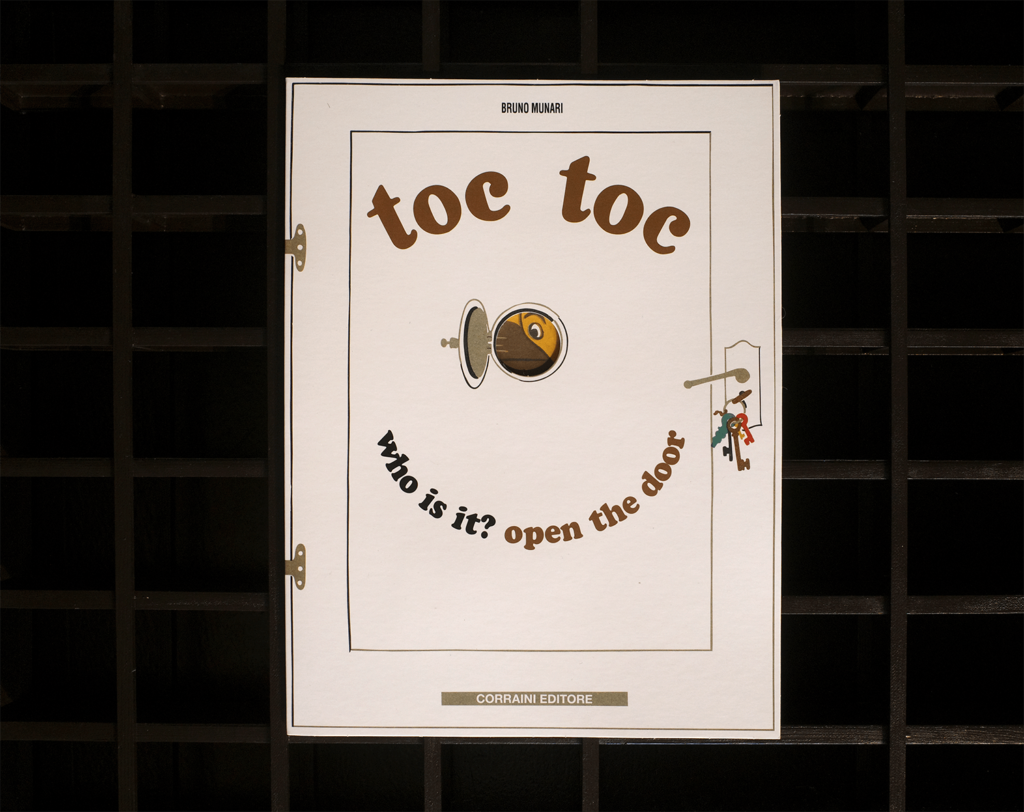 This book is one of the reprints of the exceptional books for children created by Munari in ’45, which are still as fresh and new as ever. Toc toc is perhaps the best known and most representative of the series. As with the other books, Munari plays with an essentially visual story full of expectations and surprises created using the simplest of devices. Toc toc (knock knock) … and a door opens. ↑ ↓ ↓ 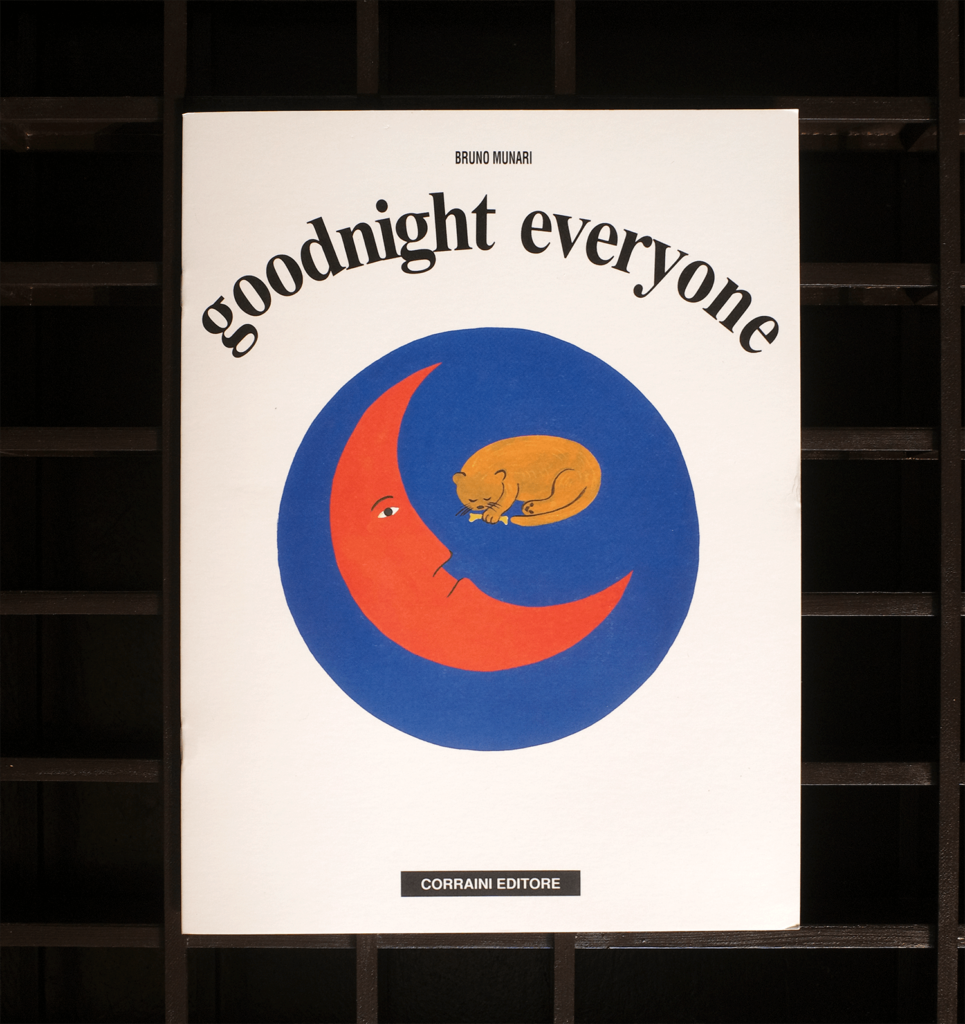 When it gets dark, it's time to go to bed for everyone. But where do all the animals go find a shelter? Good night to everyone is one of the eight books of the historic 1945 series by Munari. He devised these lively books/albums for children using large pictures, pages and inserts of different sizes and varying holes to arouse the curiosity of the observer and let him literaly hang at each page. ↑ ↓ ↓ 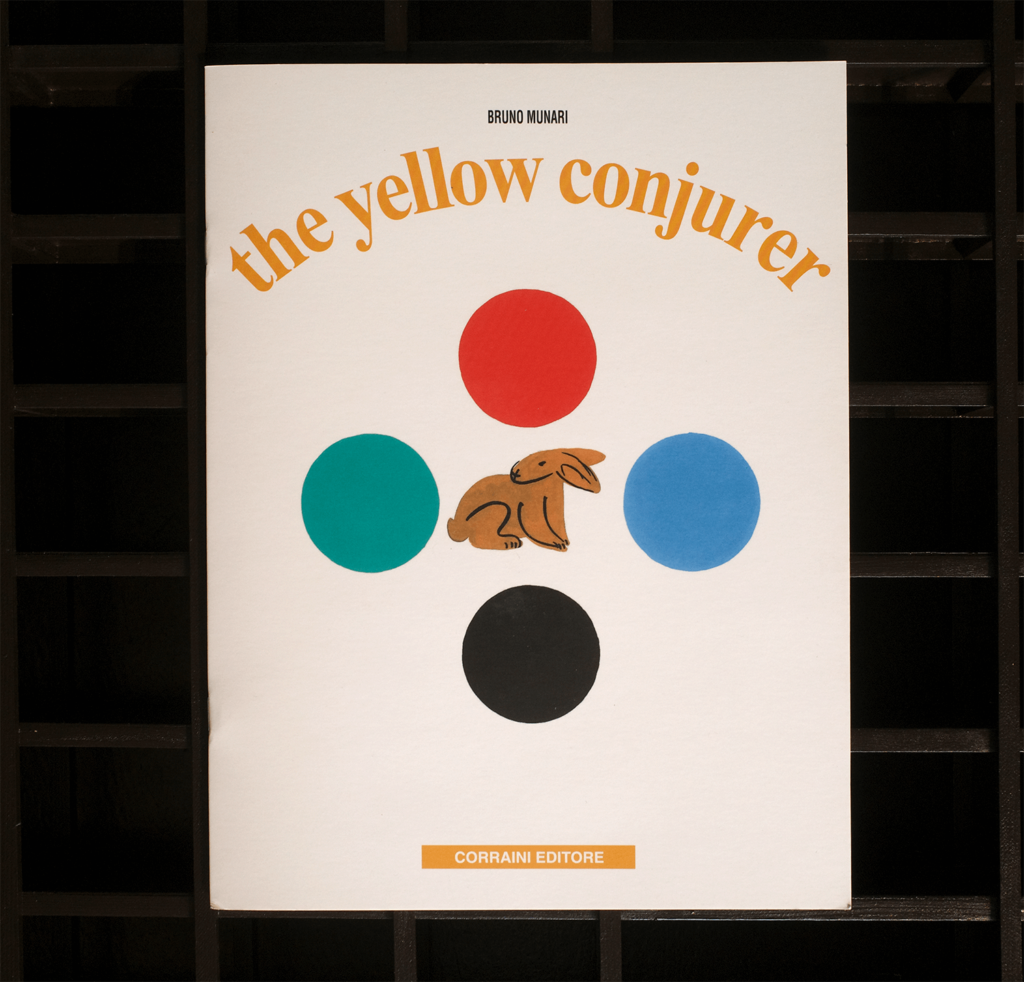 Where did the colorful balls disappeared? And the rabbit? And the three of Hearts? Together with other eight albums, The yellow conjurer is part of the historic 1945 series created by Munari. He devised these lively books/albums for children using large pictures, pages and inserts of different sizes and varying holes to arouse the curiosity of the observer and let the reader literally hang at each page. ↑ ↓ ↓ 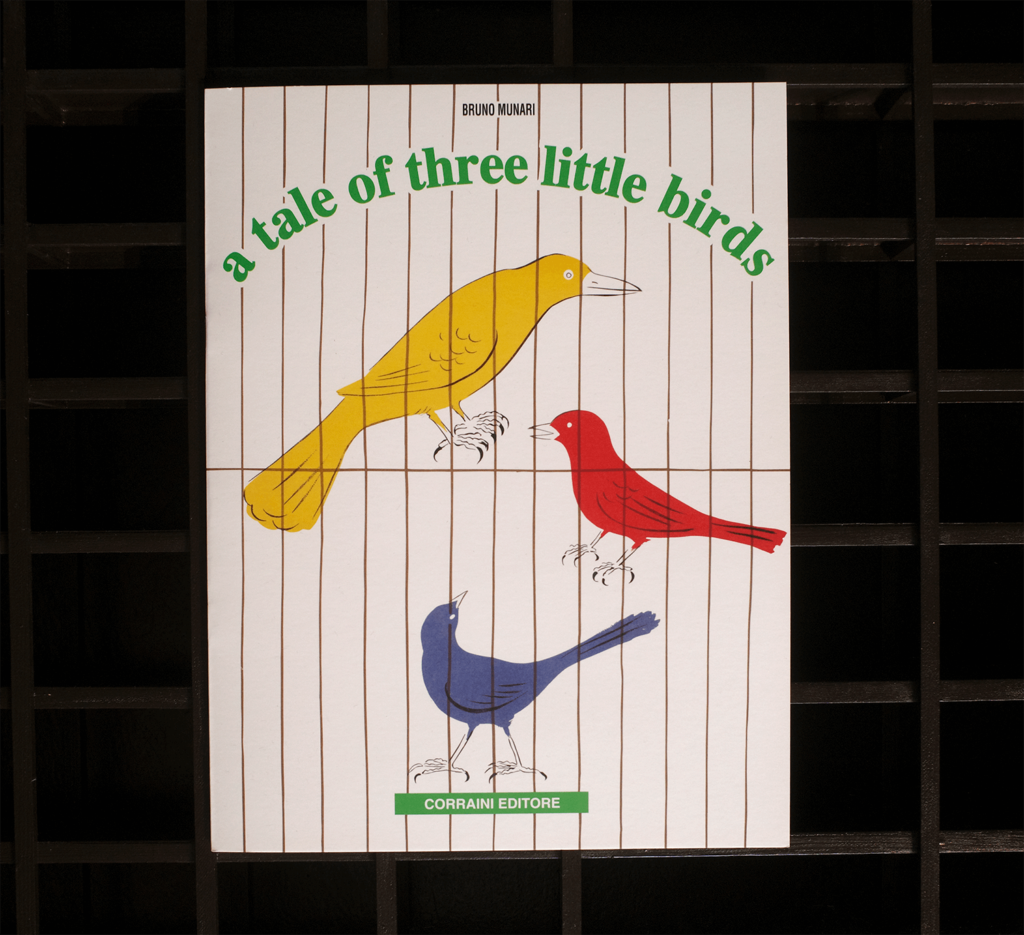 A Tale of Three Little Birds

How happened that Chì, Chià and Chiò ended up in a cage? Munari tells a story that will make us desire to open all those cages and make these little birds free again. A tale of three little birds is one of the eight books of the historic 1945 series. Munari devised these lively albums for children using large pictures, pages and inserts of different sizes and varying holes to arouse the curiosity of the observer and let him litteraly hang at each page. ↑ ↓ ↓ 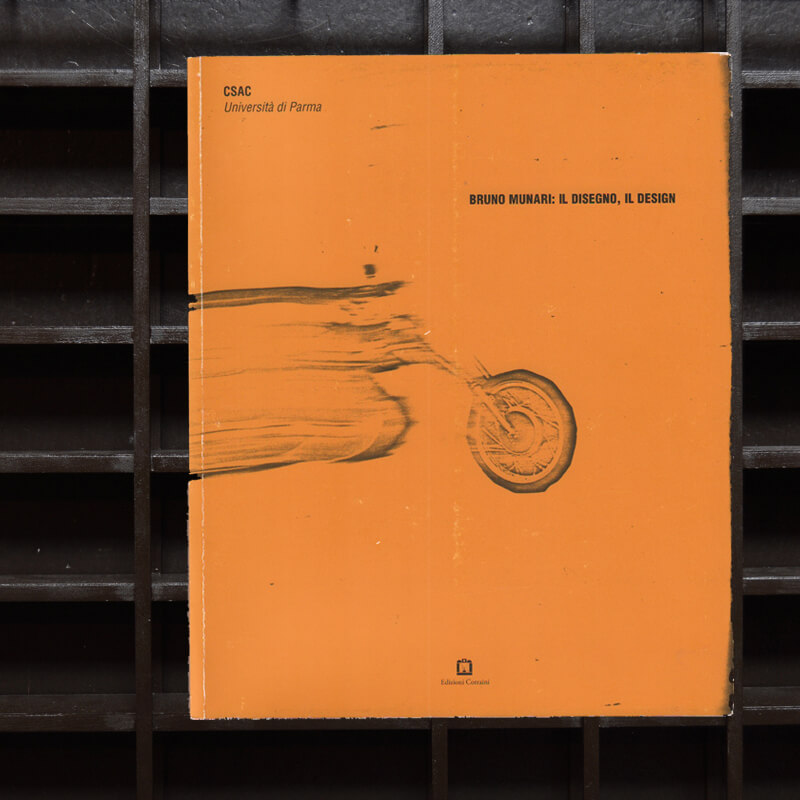 In 1979 Munari donated part of his personal archive to the CSAC in Parma: a sort of encyclopedic collection of solutions for possible answers. From the very first drawings for abstract paintings in the Thirties to the studies for the Negativi-positivi, to the sketches for publishing graphics, to the series of the original editions of his games: a rich collection of Munari’s projects, many of them previously unpublished, which help understand Munari’s poetics “behind the scenes”. From the Bauhaus to Piaget’s psychological theories, Munari assimilated many visual and conceptual trends of the XXth century, re-proposing them in a very new and original creative richness. As it has been said, he “burns” a quantity of principles, each one of them could hold up a whole artistic life. From this collection is born an accurate and complete publication, an instrument with lots of cues and informations to know Munari before his works, through the projects. The book includes: A systematic essay by Gloria Bianchino, director of the CSAC, about Munari’s project poetics seen through his most important works; the “historical” essays written in 1979 on the occasion of the exhibition Bruno Munari at the CSAC in Parma: an introduction by Giulio Carlo Argan and a detailed interview to Munari by Arturo Carlo Quintavalle. Also, a rich collection of more than 500 colour images from the Bruno Munari Fund in the CSAC Archive with the corresponding index cards and a bibliography of the most important publications about Bruno Munari’s works. This book is published on the occasion of Minimondi – 8th edition of the children’s literature and illustration festival (15th February – 9th March 2008) in Parma and province. It is also the catalogue of the exhibition Bruno Munari: il disegno, il design. The Bruno Munari Fund in the CSAC Archive at the Salone delle Scuderie of the Palazzo della Pilotta in Parma from 16th February to 30th March 2008. ↑ ↓ ↓ 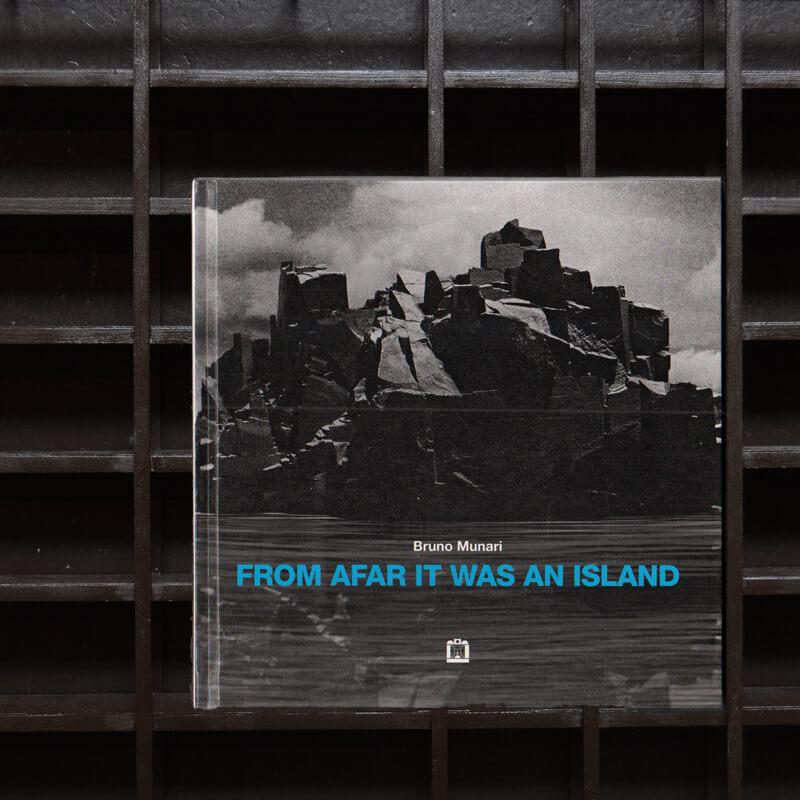 From Afar It Was An Island

Page after page Bruno Munari shows us a world hidden in the stones, populated by characters drawn along the stone’s lines and veins. While smiling at a monkey grabbed at the lianes-streaks we understand that the point of view can change a lot our perception of reality: a complex and philosophical theme tackled through a simple joke. An important book to see less and watch a little bit more. ↑ ↓ ↓

A very unusual salesman offers us a series of exotic creatures with odd habits: from a pipe-smoking flamingo to a tipsy armadillo. The finale holds a big surprise! ↑ ↓ ↓ 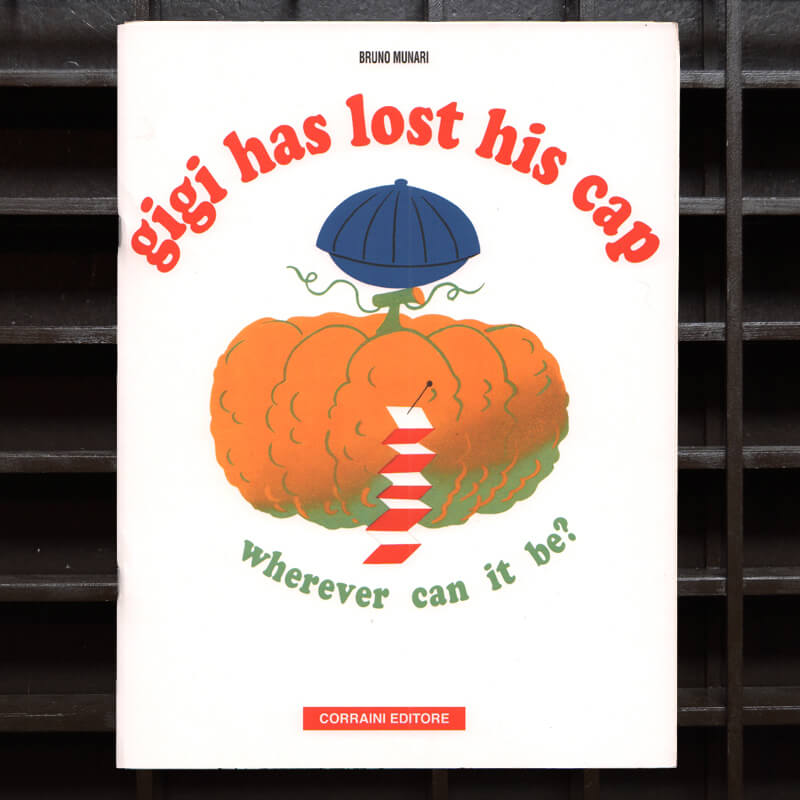 Gigi’s looking for his cap. Where can it be? Let’s help him find it by opening closet doors, lifting lids and looking around. A book to rummage through, like an attic or a messy bedroom, with direct and captivating pictures drawn over half a century ago. Ah! Gigi finds his cap in the end! ↑ ↓ ↓ 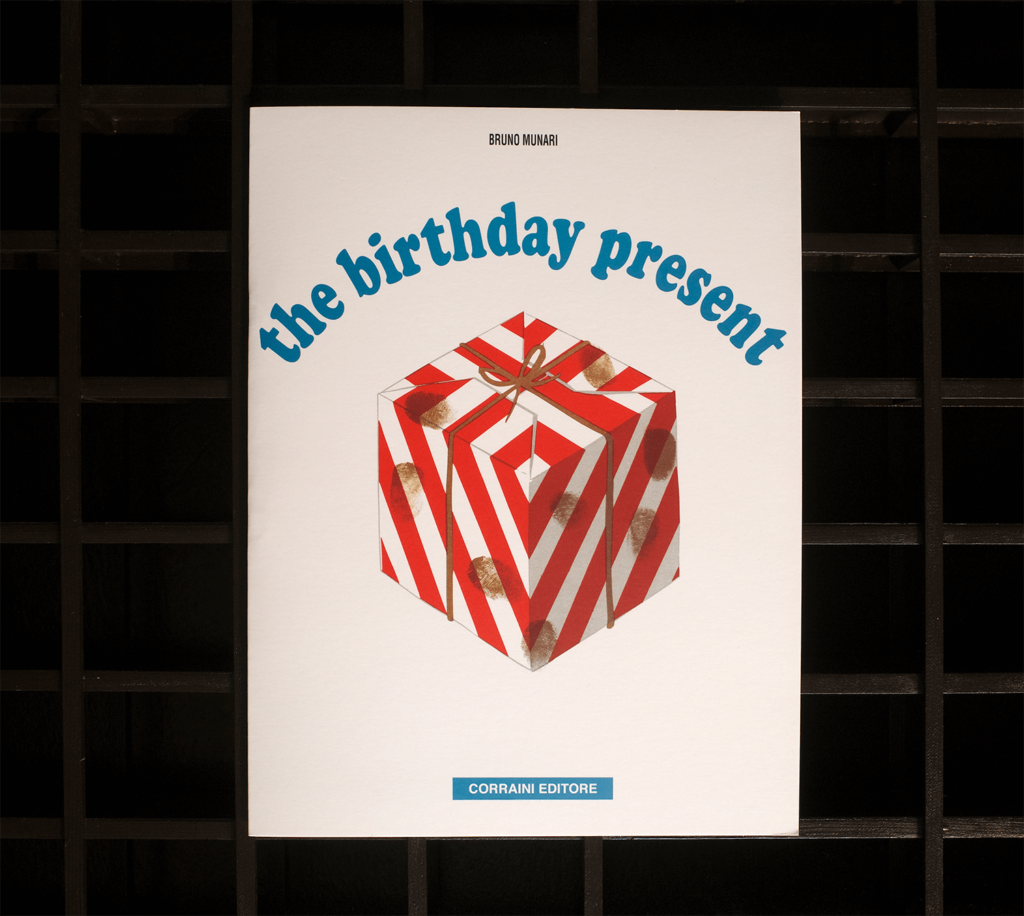 10 km. And for everyone a different means of transport and an "unexpected event" that slows down delivery of the present. What’s inside the parcel? Another addition to the series for children, thought up by Bruno Munari in1945 and still amazingly modern! ↑ ↓ ↓